Being a mom and having guilt are synonymous. I had no idea what mommy guilt really meant until I became a mom. It has no bounds and can come in all sizes. My 3 boys range in age from 2 to 8 years old. I feel guilt for something almost every day. According to most mommies I know, I am not the exception.

How To Stop Mommy Guilt 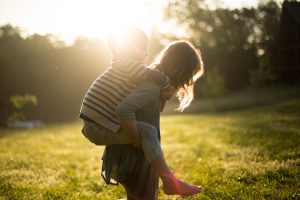 My guilt can range from not breastfeeding my boys long enough when they were babies, not spending enough time with them, allowing them to eat “junk” food, doing laundry when I “should” be playing a game with them or NOT doing the laundry, you get the point. The list is endless. I have learned over time that it is part of being a mom and it probably won’t be going away.

I remember becoming a mommy for the first time. My plan was to nurse my sweet baby boy for a year. Especially since every (there were a ton!) book I read and most people I spoke to said that was the ONLY way to go. Now don’t get me wrong, I see the value in nursing. I’m not going to debate the studies on nutrition and bonding with your baby. However, it isn’t the ONLY way to go. Some women choose not to nurse, some can’t for various reasons. To make a very long story short, I had to supplement from the beginning, for each of my boys. Supplementing only lasted 4-5 months. Then they went to formula only. I placed so much guilt on myself for having to supplement then having to give them only formula.

In my mind, I had failed as a mom! I worried they weren’t going to get the proper nutrition and wouldn’t develop on track. I wasn’t going to bond with them like all the books said. Wow, let the MOMMY GUILT begin. It sure didn’t take long for me, did it?!

To be honest, I don’t know a single mom (or person for that matter…guilt isn’t just for moms!) that hasn’t felt guilt at one time or another.  Although, there is something special about mommy guilt. It happens so much more now that I have become a mom. Anybody else agree?

Of course there are various reasons we feel guilt. I could go in depth about the deeper meaning and its impact on our psyche but, I am going to keep it real simple. We ALL have guilt from time to time.  The truth is, it can be harmful or helpful.

How can mommy guilt be harmful? Well, we let it get to us. It keeps lingering until we start saying and believing negative thoughts about ourselves. We have so many things we are trying to juggle there is no need to add anything that is going to be harmful to us.

For example, the guilt I felt for not being able to breastfeed my boys was awful. I kept telling myself I wasn’t a good mom. It was creating more stress and I was becoming depressed. Not being able to produce enough milk made me feel like a failure. I met with a lactation specialist, pumped every 2 hours, took supplements, ate lactation cookies (pretty good by the way!) but nothing worked. I let the guilt get to me and worse I started believing the negative thoughts. It was so much worse with my first son but I felt the guilt with each one.

On the flip side, guilt can be helpful. For one, it means we care, which is always good! Second, it can keep us in check. Sometimes it is a gentle reminder or it can be a BIG RED FLAG with ALARM BELLS telling us to stop ignoring whatever it is and deal with it already. Either way, it’s best to pay attention, listen to what it is saying and do something about it.

For example, there are times when I feel guilty for not spending enough time with my boys. Like many, I can have a difficult time with a work/life balance. It is difficult to manage at times. There are times I get caught up in my blog or doing things around the house and I feel like I am out of balance. I ignore it until I can’t ignore it any longer.

This is when the feeling of guilt is sending me a message. If I stop and listen, it’s telling me to put the computer away or put the laundry down and spend some much needed time with the family. In all honesty, sometimes it’s not the guilt I hear but it is my boys getting on me. Again, it might be a gentle reminder or a hit over the head when your oldest son says,” mom, can you stop working, remember you said we would go to the park?!” Talk about a punch in the gut and feeling guilty! We have all been there. It is so easy to get caught up in our day to day activities and forget our priorities.

Bottom line, the situation needs to be addressed one way or another. Best to deal with it and move on. Unfortunately, more guilt will rear its ugly little head soon enough. I promise, this is something you don’t want to put off. It’s not good for your mental health!

Follow These 4 Simple Steps To Say Goodbye to Mommy Guilt

In the example above, I knew it was irrational to think I was the worst mom ever because I didn’t nurse my boys as I had hoped. Being able to let go of that feeling is a lot harder to do. After I acknowledged the guilt and understood it came from many irrational thoughts, I talked with my husband, some close friends and other moms. I felt so much support from them and with a lot of positive self talk and affirmations I decided to let it go. I won’t lie, it was a slow process for me but it did happen.

However, when it came to me feeling guilty for not spending time with my boys I made a different choice. My guilt wasn’t irrational. In fact, it was telling me something and I didn’t want to let it go. I really wanted to spend some much needed time with them. No need to talk with anyone about this, it was pretty apparent what needed to be done! This mama put the computer away and let the house stay a mess for another day! Totally worth it by the way!

We Are Not Perfect!

Accepting we aren’t perfect is important! IT’S OK TO BE IMPERFECT. Repeat after me…IT’S OK TO BE IMPERFECT! We put so much pressure on ourselves to do it all and do it perfectly. Often times we get caught up and compare ourselves to other moms. Only to create added guilt for not doing or not being as good as everyone else. We need to support each other and lift each other up. Learn to say no at times and say yes to taking care of ourselves. Read more on how to say no here.

Try my steps above and let me know if it works for you. I’d love to hear from you or any other tips you might have.